Taking inspiration from the humble cardboard box, Ray and Charles Eames created toys and furniture to spark the imagination of kids and adults alike. A central tenant of the design philosophy of Ray and Charles Eames was an embrace of play as an end in itself, the idea that creativity should be unconstrained and unburdened. While the couple will always be remembered for their contributions to furniture, design and cinema, it was their approach to experimentation, and their interest in seemingly tangential topics such as clowns, that inspired their seemingly endless sense of wonder and a constant drive towards exploration and improvement. As champions of those beliefs, it only goes to follow that they’d also be some of the world’s foremost toy designers. 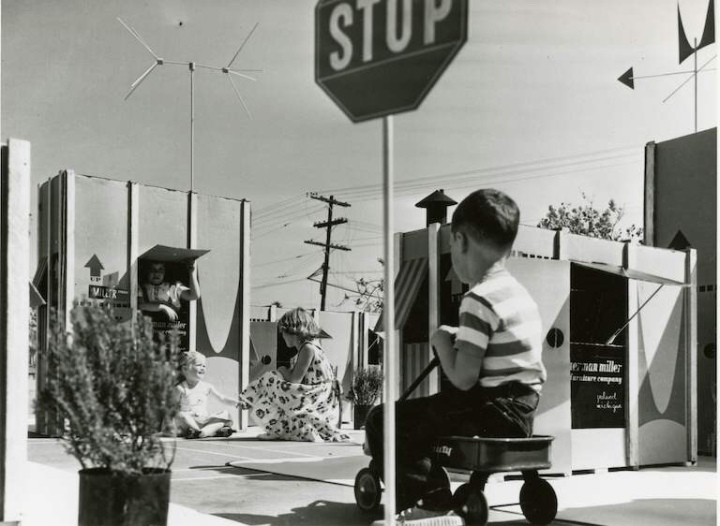 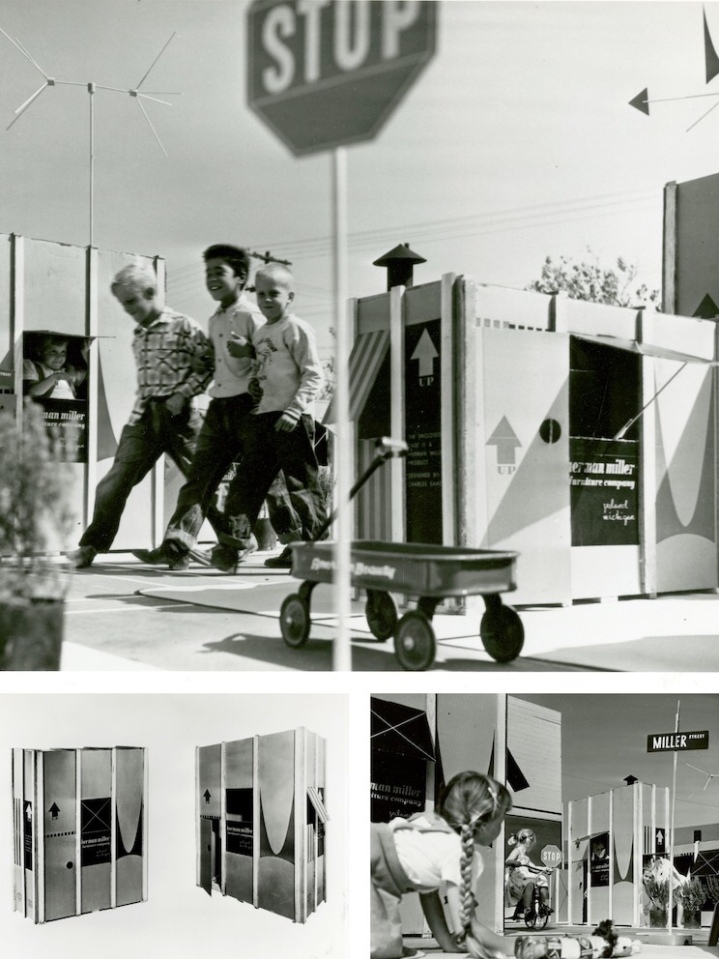 Ray and Charles Eames took child’s play seriously. They invented playthings, furniture, and films to spark, but never limit, the young imagination. Given their own ideas of fun, these toys tended to emphasize composition, structure, and building, giving children the tools of their own adult trades in miniature (and giving some adults the chance to make like children again). Many of their designs embrace what kids and parents have long known: that the box an item comes in, especially if it’s a very large item, can be more exciting than the contents. 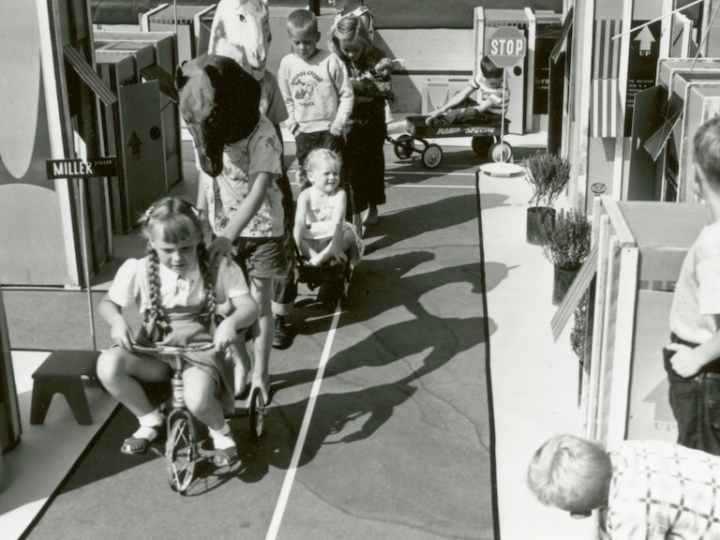 So it comes as no surprise that the Eameses improved the box itself, as a portfolio of photographs unearthed from the Herman Miller Archives reminds us. The humble cardboard box offers children their first chance to make space for themselves, whether that’s a race car, a robot, or a house, sprouting from the shipping container the Eames Office designed in 1951 for the Eames Storage Units (ESUs). 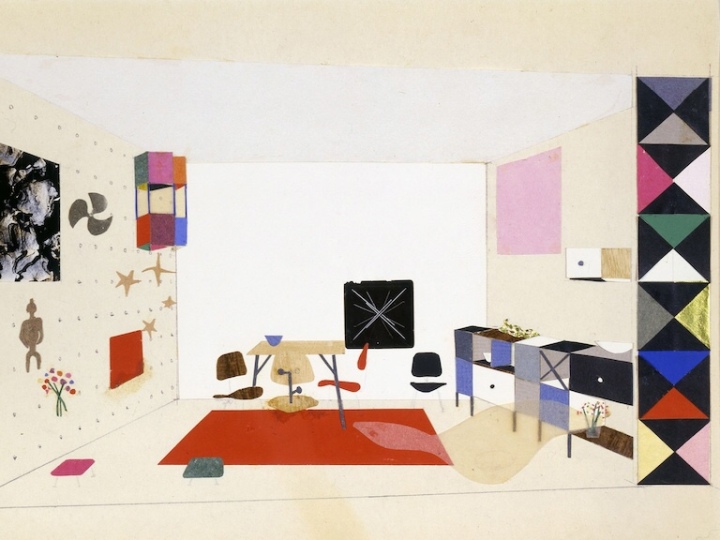 Printed in a colorful red and black design, and featuring the distinctive Herman Miller ‘M,’ the heavy cardboard carton, reinforced with wood splines, had only to be re-nailed to the bottom wood skid, after the furniture had been removed, to be made into a playhouse youngsters would love, reads text from a draft press release. A separate leaflet offers instructions on “How to Make a Playhouse,” but it should have been self-explanatory: dotted lines suggest locations for an entrance and a view out, as well as jaunty awnings.

In one fell swoop, the Eameses managed to combine adult and child fun, eliminate waste, and add excitement to the mundane process of delivery. The up arrows, as well as the deep V of the logo “M,” designed by Irving Harper for the company, suggest the possibility of upward expansion into a miniature townhouse or skyscraper, should a child or parent need more furniture.

The ESUs themselves were also a kind of demountable toy for grownups. Made of perforated steel extrusions with diagonal bracing, they could be configured as low credenzas or high bookshelves. Buyers could customize the interior arrangement, selecting plywood drawers or doors, and perforated metal or enameled Masonite filler panels. Owners could also take them apart and rearrange or add on, treating the furniture as a series of modular boxes‑ furniture as toy.

As adults designing playthings intended for children, the Eameses found more inspiration in boxes. The Toy, manufactured by Tigrett Enterprises in 1951, offered children the chance to make their own prefabricated structure, one more colorful and flexible than Carton City. The Eameses had first been in touch with Tigrett about manufacturing large, bright, paper-and-cardboard animal masks based on those they used for skits and photo shoots in the late 1940s. The Memphis-based company was run by the highly entrepreneurial John Burton Tigrett, who made his fortune selling the Glub-Glub duck and may have been looking for more patentable products. The masks never made it out of the prototype stage, but the simpler and more geometric Toy did.

The Toy combined thin wooden dowels, pipe cleaners, and a set of square and triangular stiffened-paper panels in green, yellow, blue, red, magenta, and black. Children could run the dowels through sleeves on the edges of the panels to strengthen them, and then attach these struts at the corners. Initially sold in a big, flat box via the Sears catalog, the Eameses soon redesigned this packaging as well, creating a far more elegant 30-inch hexagonal tube, into which all parts could be rolled and stored.

The first version of the Toy made spaces big enough for children to inhabit, like the cartons. The Little Toy, released in 1952, was scaled more like an architectural model, allowing children to radically reinterpret the dollhouse. (The office later prototyped a modern model house for Revell, but it never went into production.) The Little Toy boxes, which feature a grid of colorful rectangles and words, resemble the panelized arrangement of the Eames House façade and the ESUs, and all of these products, at their various scales, were being developed at the Eames Office within the same few years.

In the voiceover for “Toccata for Toy Trains,” Charles Eames says, “In a good old toy there is apt to be nothing self-conscious about the use of materials. What is wood is wood; what is tin is tin; and what is cast is beautifully cast.” He could have added, in reference to the couple’s own toys, what is cardboard is cardboard, and then talked about the qualities that make it an ideal building material: its strength, its low cost, its ability to withstand a judicious number of cuts and slots. 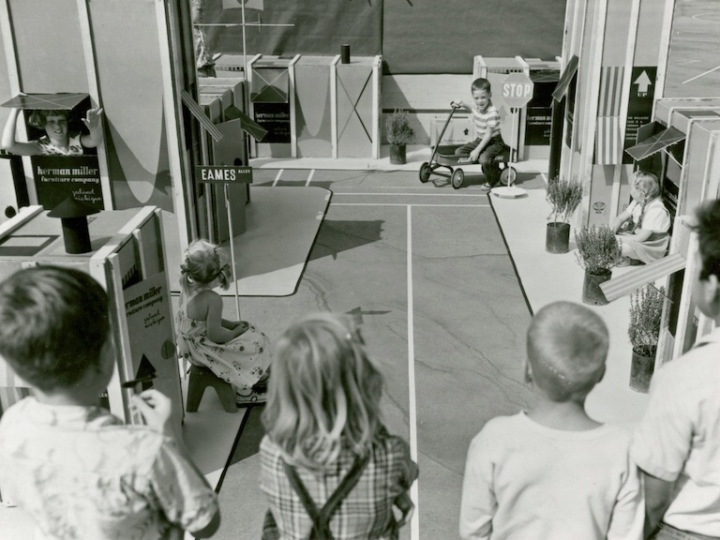 Why Magazine by Alexandra Lange

All my life, I have loved Halloween. I’m calling it now:
Halloween, with all its tacky, kitschy goulishness, is the
best holiday. It’s a legit time for just  having some ol’ fashion
fun with pranks and mischief-making. Halloween is the only
time kids AND adults can be silly, juvenile idiots and get
away with it. And for those who are into a little history
here is an abbreviated version:

Today is All Hallows’ Eve, or Halloween. The modern
holiday comes from an age-old tradition honoring the
supernatural blending of the world of the living and the
world of the dead. Halloween is based on a Celtic holiday
called Samhain. The festival marked the start of winter
and the last stage of the harvest, the slaughtering of
animals. It was believed that the dark of winter allowed
the spirits of the dead to transgress the borders of death
and haunt the living.

Eventually, Christian holidays developed at around the
same time. During the Middle Ages, November 1 became
known as All Saints’ Day, or All Hallows’ Day. The holiday
honored all of the Christian saints and martyrs. Medieval
religion taught that dead saints regularly interceded in the
affairs of the living. On All Saints’ Day, churches held masses
for the dead and put bones of the saints on display. The night
before this celebration of the holy dead became known as
All Hallows’ Eve. People baked soul cakes, which they would
set outside their house for the poor. They also lit bonfires and
set out lanterns carved out of turnips to keep the ghosts of
the dead away.
Credit: The Writer’s Almanac

I drove by this display of Halloween silliness yesterday and
made me stop and smile.
Happy Halloween, fall has officially begun.

A gummi bear catapult…lol, made me smile
and brings out the kid in me.

Love this colored pencil art installation by the
University of Minnesota School of Architecture.
The life-size exhibit represents the historical
moments of the school during their 100-year history.
The curvy installation is made up of 100 robotically-routed
plywood ribs that are joined together with 8,080 colored #2 pencils.
Clever, creative and unique. 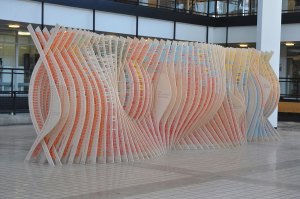 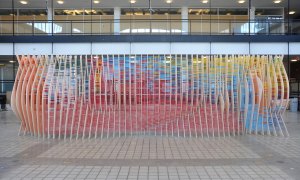 Wish I was in NYC this weekend to participate.
Open House New York sounds like a whole lot of fun.

Love these photographs.
So much fun in so many places. 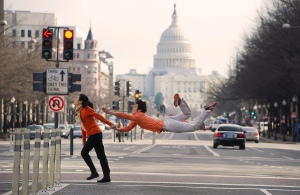 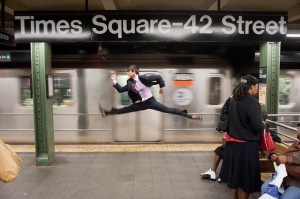 All photos by Nagano Toyokazu

The rug that goes vroom….love it. 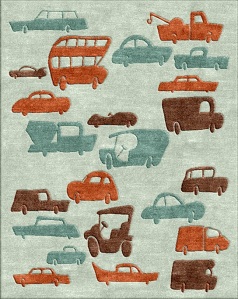 More images from the Fremont Fair.
Couldn’t have said it better myself.
HAPPY SUMMER SOLSTICE, may all days
be sunny, happy, and long… 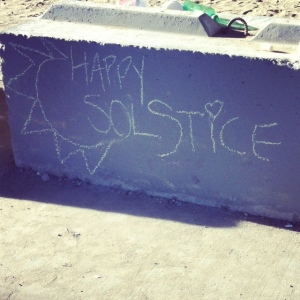 And of course the famous (or perhaps infamous) Fremont Troll….

I spent the weekend perusing the Fremont Fair+Parade.
For those of you who don’t know about it you will
by the time I finish todays posts. I’ll start at the
beginning. I like to park a fair distance away
from my destination because
a) I get to see all the wonderful micro sights
I would miss if I  didn’t and
b) I love to walk.

First up is the wonderful wall mural along a concrete wall
walking down to the fair. It’s a cartoonish play off the
Fremont Neighborhood cafes and icons.
Fremont, otherwise known as The Center of the Universe,
is an awesome place to hang out on any day.

Not anywhere near Kansas…and dogs rule.

Mural is a block long and run under an overpass.

Colorful version of “Waiting for the Interurban”

Across the street is a wonderful series of painted posts
creating a colorful rhythm.