Artist Piet Mondrian (1872–1944) was introduced to art at an early age by his father, a drawing teacher at a local primary school. At the age of 20, formally began his career as an artist and teacher. His artistic career began with more traditional, representational paintings, however upon moving to Paris in 1911 his style was greatly influenced by Cubism and his work began to turn more abstract. Later, alongside painter Theo van Doesburg, Mondrian created the De Stijl movement, which embraced an abstract, simplified aesthetic. The De Stijl artists sought to devalue tradition, and they greatly impacted the rise of modern art during the 20th century. 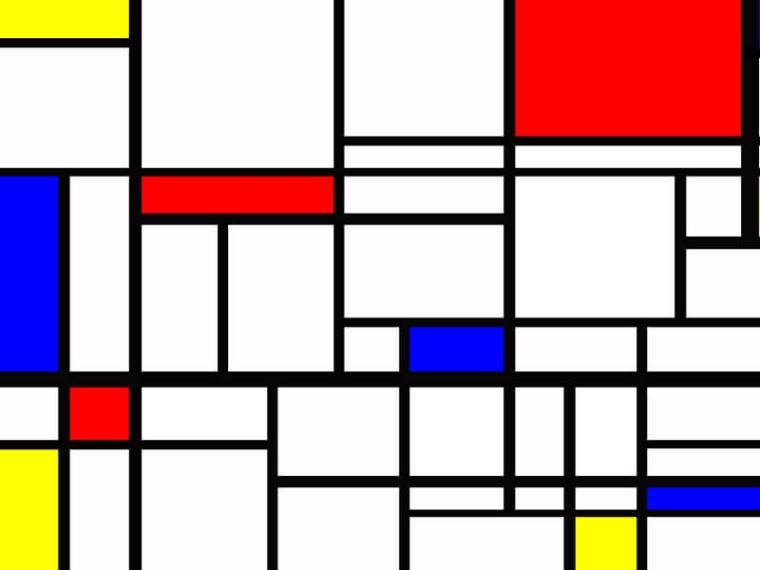 Considered a pioneer of 20th century abstract art, Mondrian is best known for his paintings featuring basic forms and colors. The artist limited his paintings to the three primary colors (red, blue, and yellow) and the two primary directions (horizontal and vertical), thus creating colorful and geometric compositions. He hoped that these simplified subjects could transcend cultures and become a new common language. Mondrian’s impact on modern art is visible in the work of other artists and subsequent artistic movements, as well as in contemporary art and design. Here are six projects that embody the spirit of Mondrian’s work.

A Mondrian inspired bathroom in Virginia 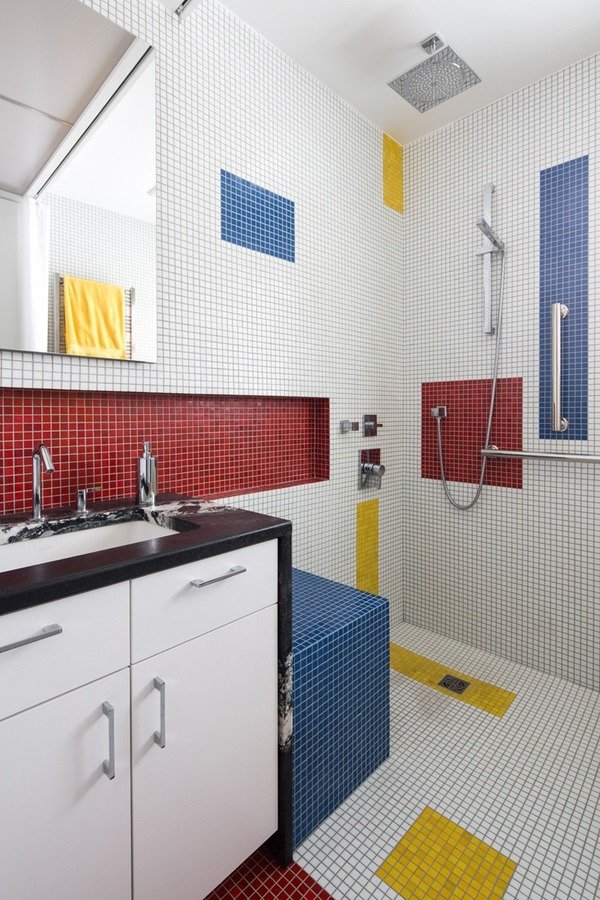 The clients for this small bathroom project are passionate art enthusiasts and asked the architects to create a space based on the work of one of their favorite abstract painters, Piet Mondrian. Mondrian, a Dutch artist associated with the De Stijl movement, reduced designs down to basic rectilinear forms and primary colors within a grid. Alloy used floor to ceiling recycled glass tiles to re-interpret Mondrian’s compositions, using blocks of color in a white grid of tile to delineate space and the functions within the small room. A red block of color is recessed and becomes a niche, a blue block is a shower seat, a yellow rectangle connects shower fixtures with the drain.

The bathroom also has many aging-in-place design components. There is a zero clearance entrance to the shower. The doorway is wider for greater accessibility and pocket door installed to save space. ADA compliant grab bars were located to compliment the tile composition. 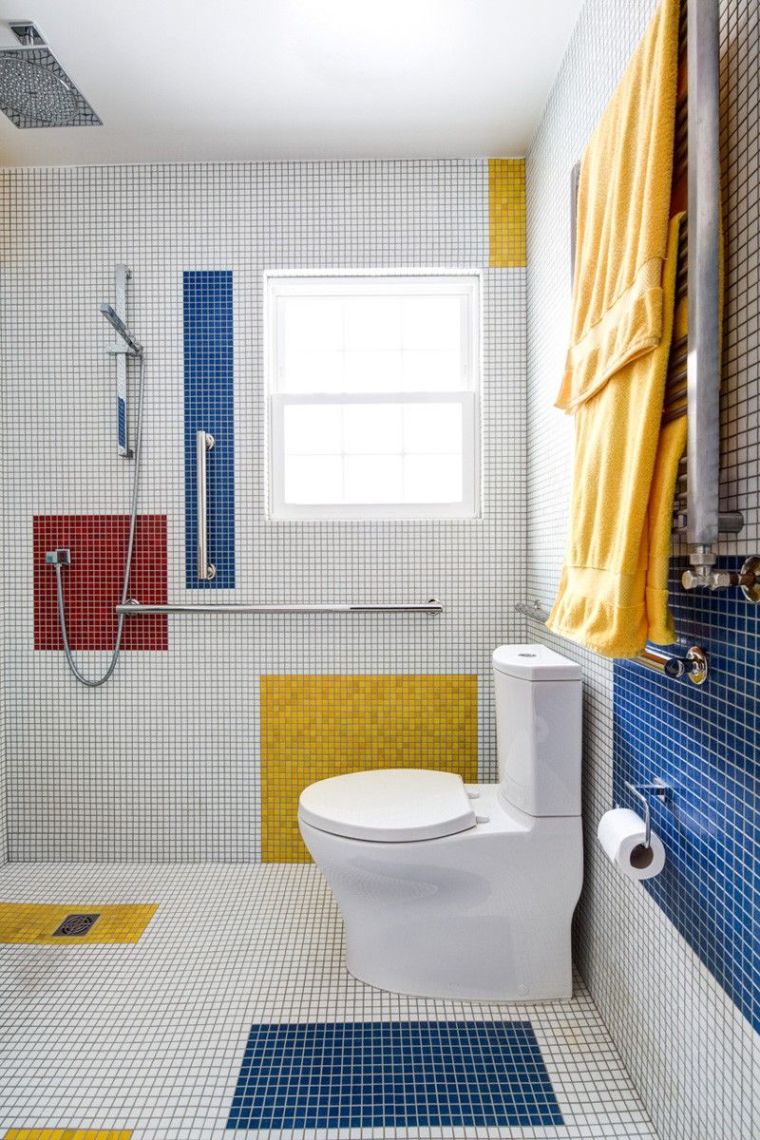 Design by Alloy Workshop
The design team used floor-to-ceiling tiles to create the geometric interior. Yellow tiles connect the shower fixtures to the drain, blue tiles are used for the shower seat, and a red block is recessed to create a niche in the wall. 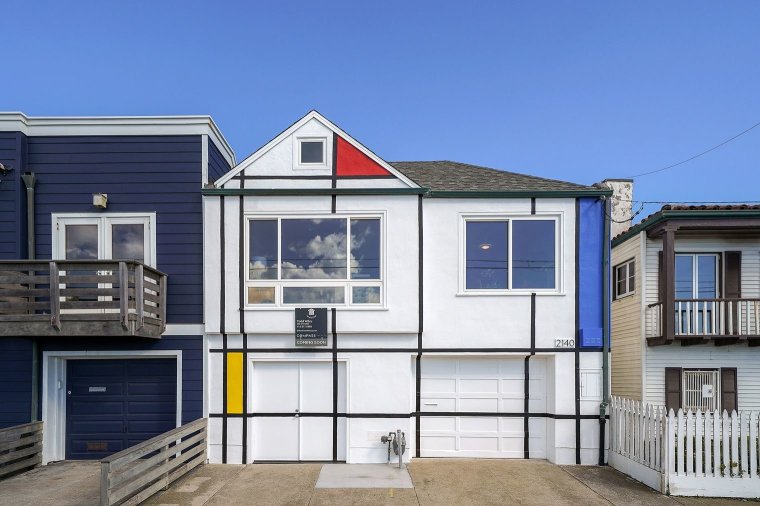 The exterior of this home in the Outer Sunset neighborhood of San Francisco was inspired by the colorful grid-based paintings for which Mondrian is best known. Painted in Mondrian’s style over 20 years ago, this whimsical house has become iconic also due to its location across the street from the beach. The two-story house features two beds and one bath, as well as a recently landscaped backyard—and it recently hit the market.
Update: The Outer Sunset home bearing a paint job a la Piet Mondrian’s most famous work sold over asking, netting $2,050,000. That’s $555,000 over the original ask of $1.495 million. No word if the new owner will keep the exterior paint job. 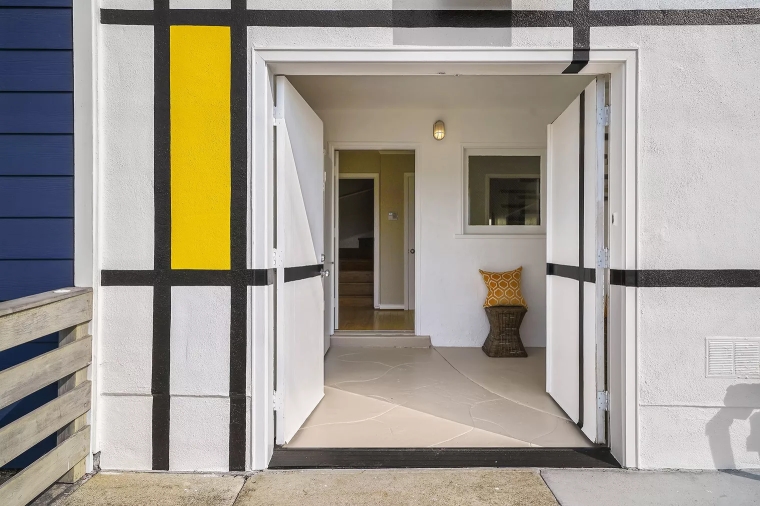 The ‘Breakfast With Mondrian’ Apartment 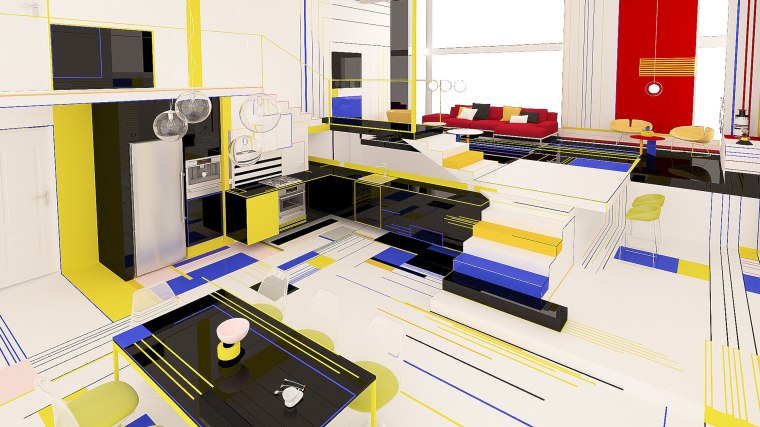 Breakfast with Mondrian is an experimental project where the use of forms, lines and colors is focusing of the positive impact which has to provoke the space on the people living there. The design concept is inspired by the Dutch painter Piet Mondrian for his vision of nature, manifested in his simple and pure abstract paintings. He is one of the founders of the Neo-Plasticism Movement, style which is recognized with the use only of horizontal and vertical lines and the fundamental colors – red, blue, yellow. With these elements the artist developed a new plastic language where he shows how he sees the world, the nature and the human – as one unity. In his paintings he represents the perfect harmony between the elements of this unity. 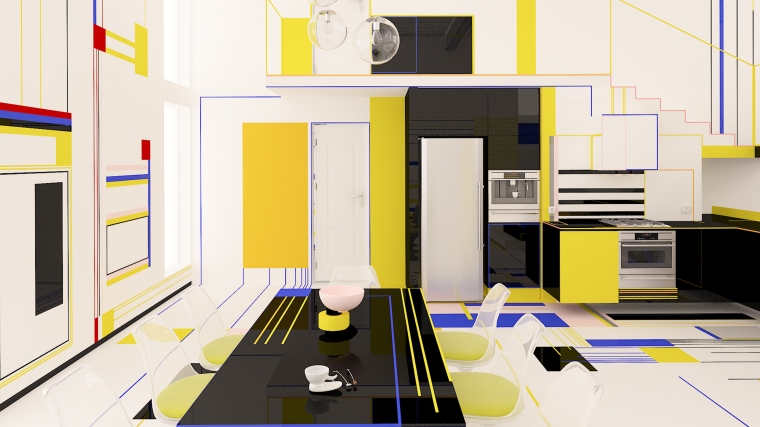 Mondrian’s aim is to provoke emotions to the viewers. The viewers should feel themselves dancing while watching his paintings. Through lines and colors the inhabitants and their guests should feel themselves as they are part of a dance. In the dance between forms and colors we use the white and black colors as intervals between them. The white is active, the black is passive. As Mondrian says that through oppositions of color and line one can see the plastic expression of relationships.
The space of this experimental modern house is open and every zone has its own function and in the same time is connected to everything else. The meaning is that the kitchen cannot be without the dining room, or living room. As in nature everything is connected and cannot without its parts, because one unity cannot be unity without its parts. 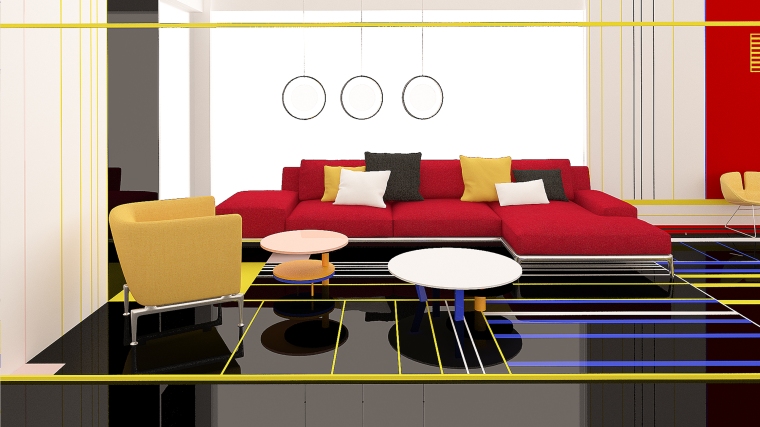 Breakfast with Mondrian is a concept by design duo Brani & Desi inspired by the artist’s work and vision. Mondrian saw the world, nature, and the human as one unit, and he expressed these relationships through his geometric and colorful paintings. Brani & Desi aim to provoke the emotions of their viewers and to create unity within every aspect of the apartment. 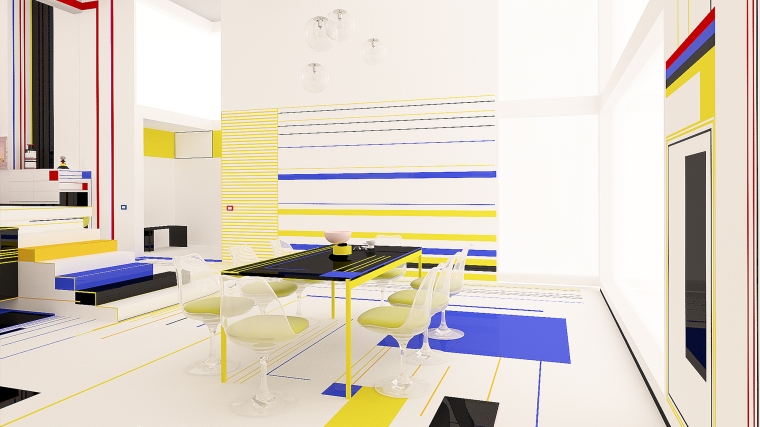 The ‘Mondrianized’ City Hall in The Hague
In honor of the 100th anniversary of the Dutch De Stijl art movement, The Hague unveiled the largest Mondrian in the world. The city hall building is painted with the familiar colors and lines of a Piet Mondrian work. 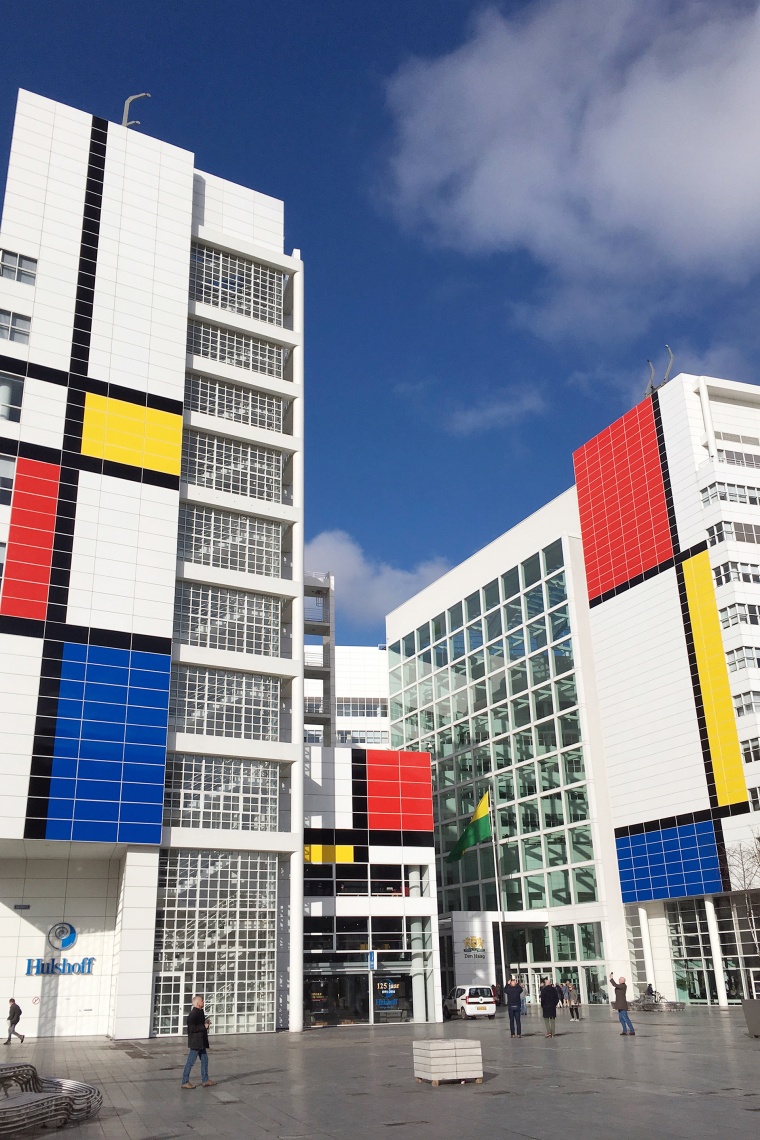 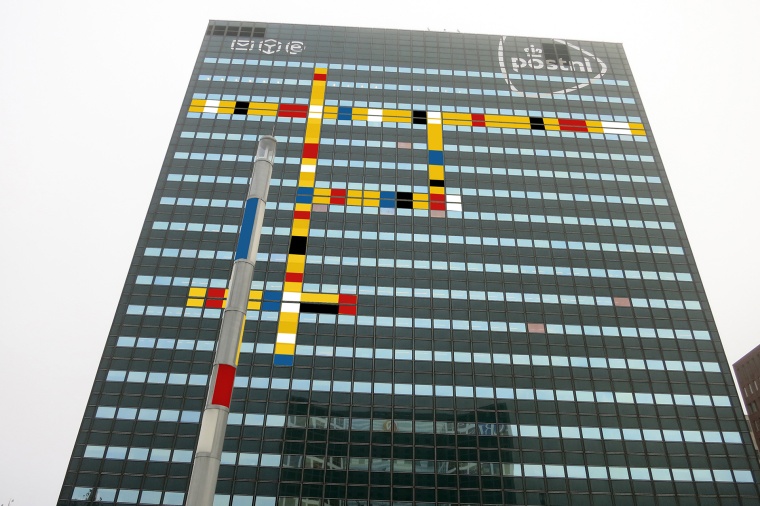 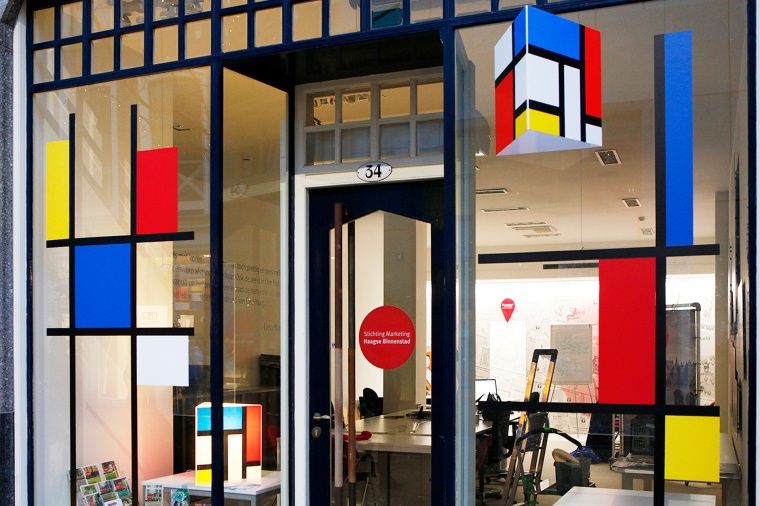 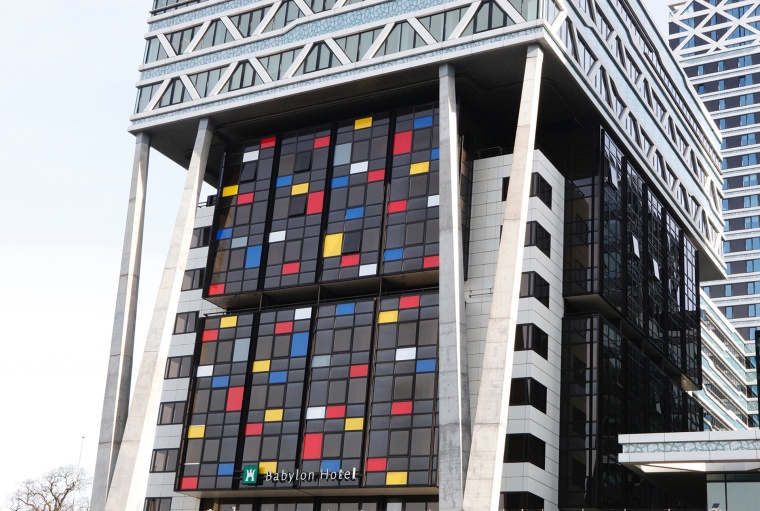 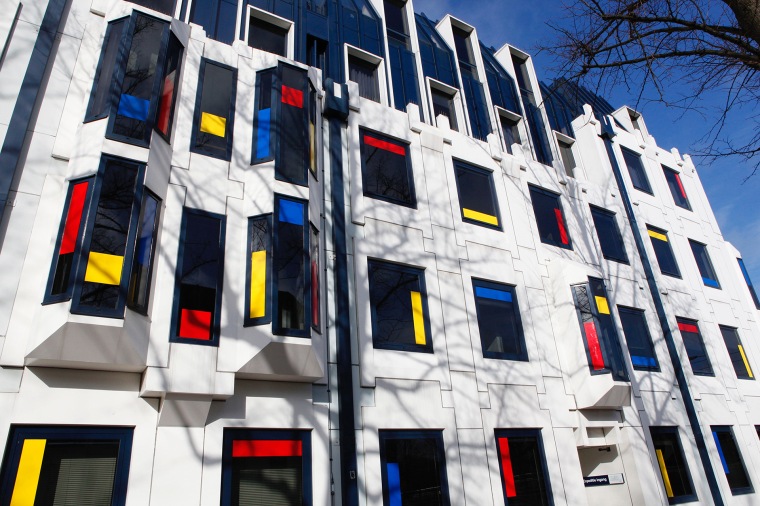 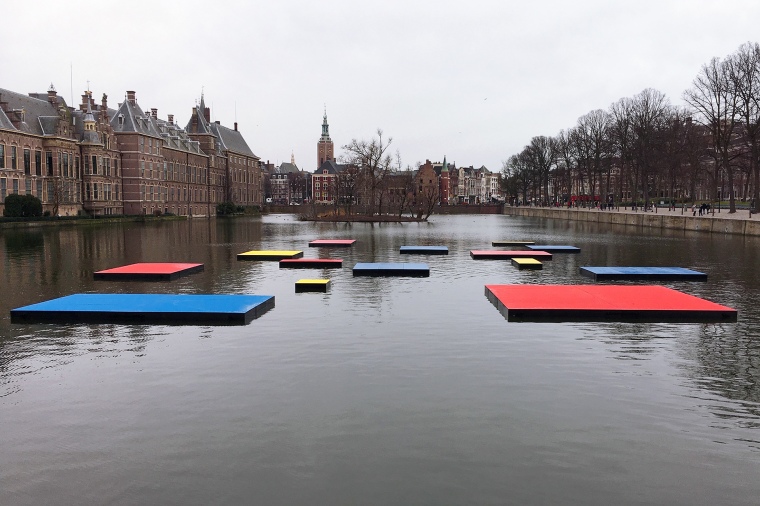 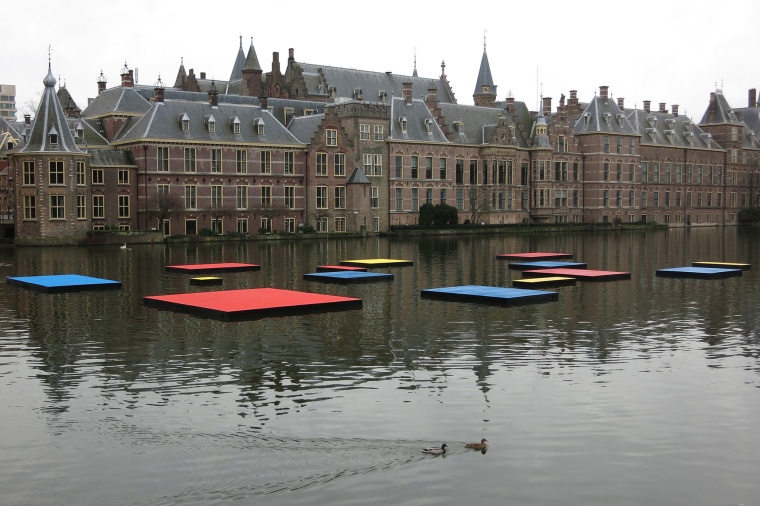 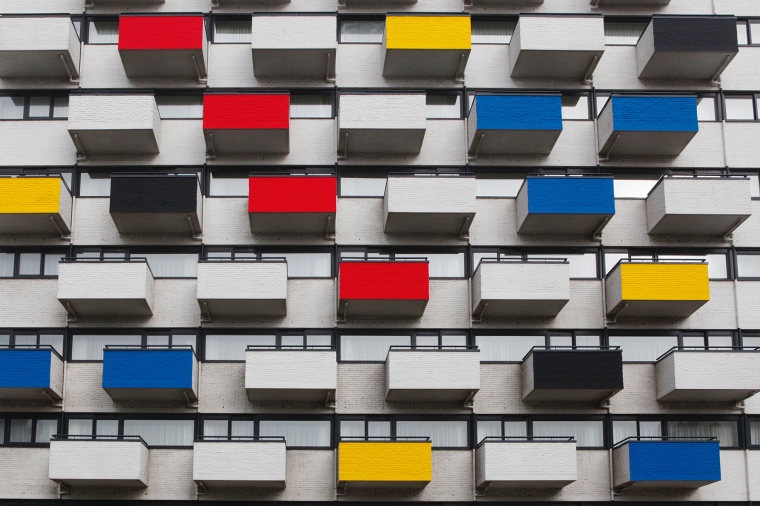 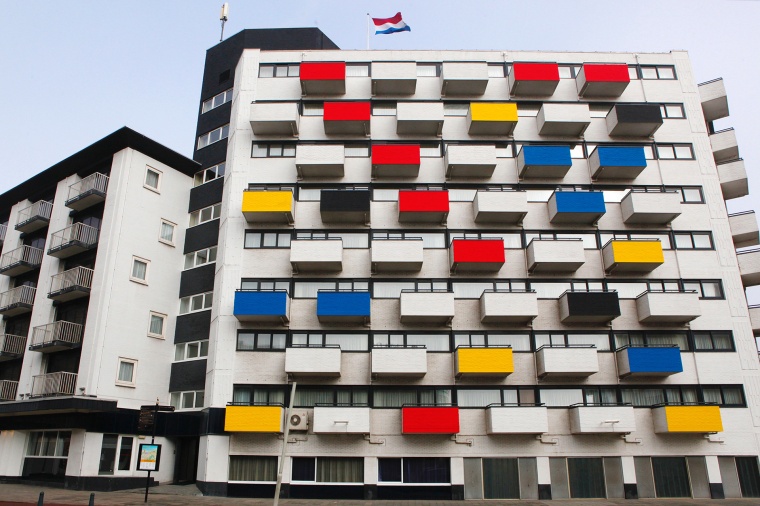