See Seattle from 500 feet through the Space Needle’s rotating glass floor. The 605-foot Space Needle is the most iconic structure in Seattle.

Built in 1962, and reportedly purchased by investors for $75,000, the landmark has an observation deck and revolving restaurant at 500 feet, where hundreds of daily visitors hunker down for 360-degree views of Seattle. Now, 56 years later, the Space Needle is unveiling a massive renovation, with many of the new spaces now open to visitors. Guests can also now “float” over Seattle 520 feet up via new Skyrisers by leaning into the tilting glass walls on the open-air deck for an angled vantage point. 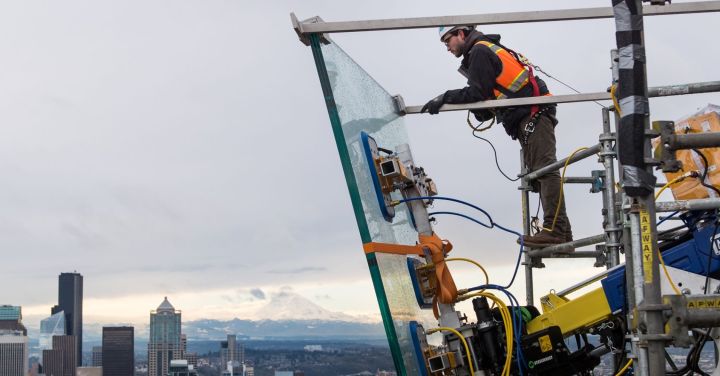 Those who have a fear of heights might not want to look down next time you go up to the Space Needle. One of the centerpieces of the landmark’s massive remodel, designed by Olson Kundig, is now complete: a rotating glass floor, allowing visitors to look down at the 500 feet between them and the ground.

Called the Loupe, the Space Needle’s new floor gives a view not just of the people milling about below, but the inner workings of the building, giving the viewer a sense of what makes the Needle tick. Counter-weights and the insides of the elevator are both revealed.

The glass floor goes along with newly-open glass walls, doing away with a more closed-off design and adding glass benches that help give the illusion of floating above the city. All together, more than 176 tons of glass were used in the renovation.

As before, the rotating floor will be part of a restaurant—the exact concept is slated to be announced later this year—but for now, visitors can have a drink or a snack on that level at Atmos Wine Bar. Atmos Café is located on the second floor. Want a glass of water or wine with your meal? It’ll pair well with the glass tables, chairs, windows and rotating floor in the reimagined space. Dropping a fork in this place is going to be a newsworthy event! 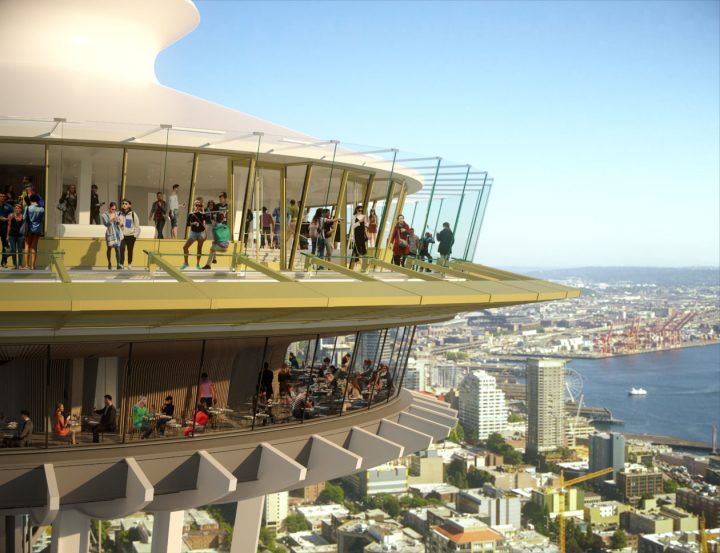