The 320,000-square-foot Nordstrom store opened October 24th, at the bottom of Adrian Smith + Gordon Gill’s Central Park Tower, which is the tallest residential building in the world. Nordstrom worked with design firm James Carpenter Design Associates on the design of the store, which comprises five floors fronted by the undulating glass façade, and two levels located underground. Inside, LED lights are used to light up the glass walls, while chainmail is used as a curtain to shade the interiors from strong light.

Rather than using walls to segment luxury brands, the team also created partitions from the metallic material. The small perforations allow natural light to filter through the screens, which are then left to drape and gather at the bottom on the off-white terrazzo tile floors.

Ceilings are 19 feet tall to keep the retail areas feeling spacious and light, despite no windows anywhere else in the store except for the front. Two stairwells flank the entry, and an escalator spans the seven levels with views to all of the floors.

Nordstrom’s New York store also features a lounge designed by local studio Rafael de Cárdenas, Broadway Bar, and a bar in the women’s shoe section. The store is complete with nine drink and dining options, with the restaurant Wolf open after shopping hours and accessible with a separate entrance. A pizza outpost, seafood café and donut spot are located at the lowest level.

Nordstrom is located two blocks south of Central Park on 225 West 57th Street and Broadway, and accompanied by a new Nordstrom Men’s Store across the street. 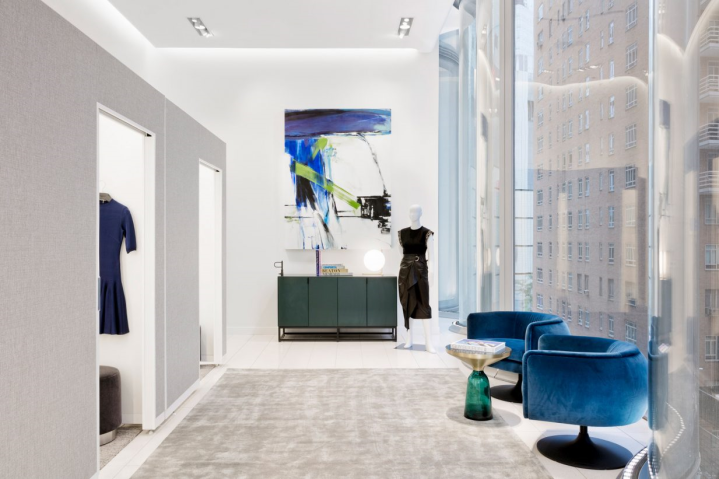