There is no denying the power of RED.
Seattle City Hall has these fantastic red doors
that dazzle in sunlight. The first two images are
taken from inside; the third image is an exterior view.
Awesome indeed. 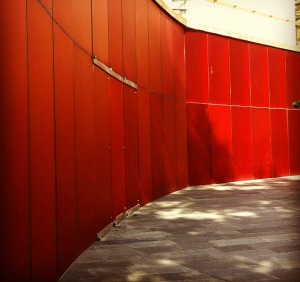 Symbolism of the Color Red

Red is the color of fire and blood. Hebrew words for blood and red have the same origin: “dm” means red and “dom” means blood. Blood and fire have both positive and negative connotations: bloodshed, aggression, war, and hate are on one side, and love, warmth and compassion on the other side. In ancient Egypt, red was the color of life and of victory. During celebrations, Egyptians would paint their bodies with red ochre. The normal skin tone of Egyptian men was depicted as red, without any negative connotation.

The oldest pigment was probably red ochre, which was used in cave art. The ancient world had red madder lake, artificially-made red lead, and vermilion (natural mineral cinnabar). Artificially-made vermilion was the most prominent red pigment until the manufacture of cadmium red in 1907.