I was strolling through a used camera shop over the holidays not looking for anything in particular and what to my wondering eyes did appear – an antique box camera sitting on the floor in a corner for god knows how long, as I picked up. I dusted it off and asked the friendly man at the counter WTH is this? He was only too happy to tell me it was a box camera. I was probably the first person to pick it up in 100 years much less inquire about what it was. As he explained to me what it was and how it worked, you simply aim and shoot, he was surprised it was in great condition. In fact, it was in such great condition, he wanted it for himself. Without thinking much about it, I paid the asking price of $20, bought some 120 B/W film and took it home.

The question was, now what am I going to do with this? Play with it of course! This was the first photo I took with my box camera. One thing I discovered – you have to remember to roll the film forward otherwise you end up with a double image, or in this case, 3 images. It does not advance for you – Oops

If the subject is too close (less than 10ft away) it will appear blurry.

This is the result if you don’t hold it steady. 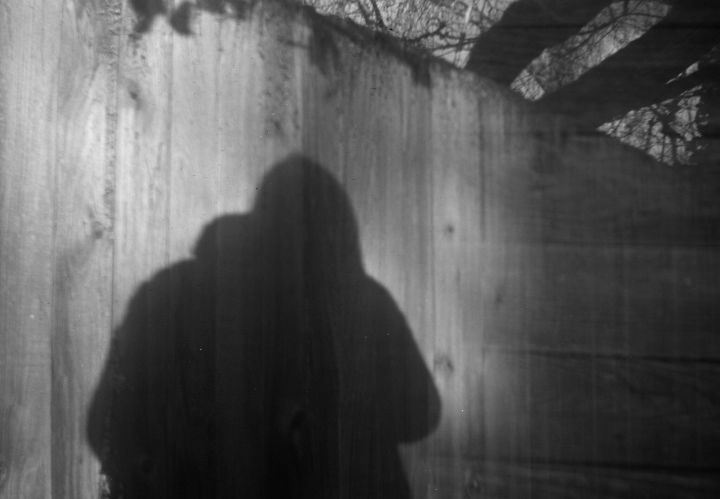 The camera I have is a bit fancy for it’s day. It has a little metal tab that is you pull it out it has a yellow filter resulting in stronger contrast. This is something I need to experiment more with. 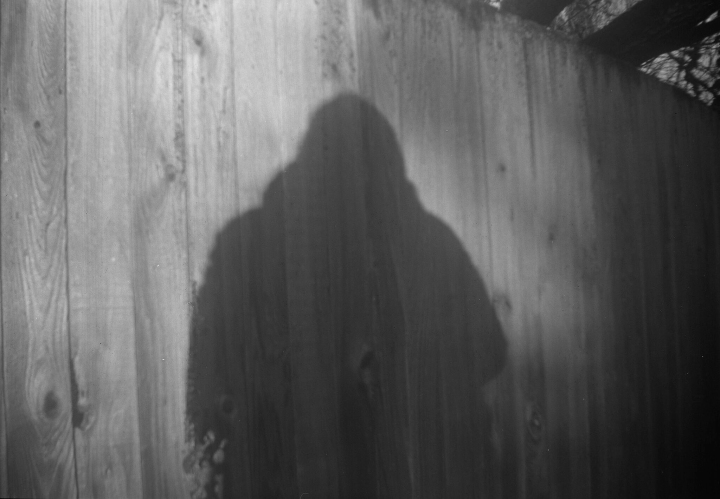 Similar image without the yellow filter.

A Little History about the Brownie
First introduced by Kodak back in 1888, the box camera is one of the simplest forms of camera out there. Popular until halfway through the 20th century, they started to disappear as 35mm SLRs and rangefinders started to take over. The box was marketed by Eastman Kodak Co as the “Brownie”.

Basic Operation
The Brownie operates under the simple idea of aim and shoot:

1: A shutter in the front of the camera is opened allowing light to pass through the lens. This light is reflected from the object being photographed.

3: The lens projects the inverted image onto light-sensitive film at the back of the box.

In order to keep the consumer’s cost low, the Brownies did not have the best lenses, shutters, internal mechanisms, or outer coverings. They were, however, of comparatively high quality for their day. A Brownie that was made in the 1940s, for example, if it was attended to under relatively good conditions and kept clean and in working order, may be relied upon to take reasonably sharp, clear pictures even today.

Lenses
Most Brownies came with a fixed-focus lens, either meniscus (concave on one side/convex on the other, with light entering from the concave side) or doublet (two lenses of similar construction with the shutter mounted between them). The doublet lens provides a magnifying effect, however slight, that the meniscus cannot duplicate. The term fixed focus refers to a factory setting, on the Brownies usually from eight feet to infinity, at which sharp pictures could be taken. 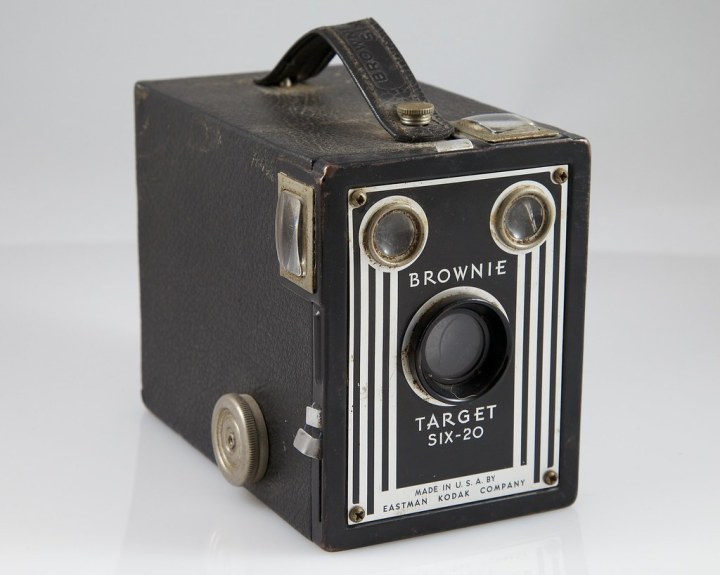 Shutters
In most cases, since simplicity was its greatest feature, the rotary shutter on a Brownie was either a single speed only. Early Brownies employed a shutter release lever on the lower right-hand-side of the box, whereas later models might have had a push-button. Shutter speeds for the Brownie could be pre-set anywhere from 1/25th to 1/50th of a second.

Apertures
Since the Brownie was by its very nature a camera that anyone could use, lens apertures were also pre-determined. Some, however, came with a feature that allowed a smaller lens opening to be used, on days with brighter sunshine and so forth. This was engaged by yet another lever located at the top center of the camera’s front panel which could be pulled up or pushed down for smaller or larger aperture, respectively.

Viewfinders
Most Brownies had viewfinders with a reflex mirror assembly. Simply put, the camera had a window in front, a window at the top, and an angled mirror inside that connected the two. In order to compose the picture, it was necessary to hold the camera at about waist-level and look down into the finder. Once the subject was composed in the approximate center of the viewfinder, the shutter lever could then be depressed. There were no framing marks in the viewfinder. If the Brownie took square pictures (6 cm x 6 cm), it would have only one center viewfinder; if it took rectangular pictures (6 cm x 9 cm), it would have two finders, one on top and one on the side. In the case of the latter, the top finder was for portrait and the side finder for landscape pictures.

It is interesting to note here that many Kodak instruction manuals of the period advised the photographer to hold his breath when shooting a picture. This provided a simple method of making sure the camera stayed still during exposure. 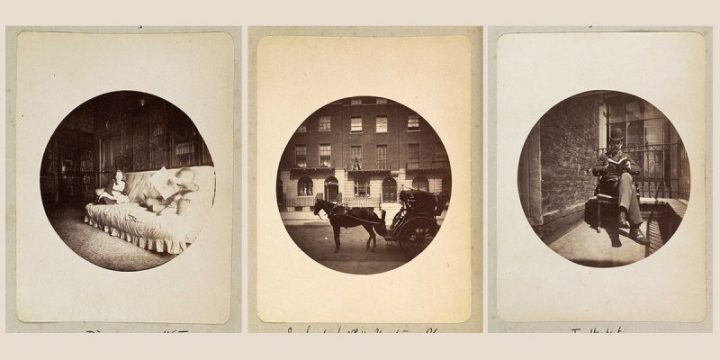 Camera Body
Early camera bodies were constructed of either metal or leatherette-covered cardboard and were priced to match the construction. Later, with the development of Bakelite and other plastics, construction of the cameras was almost entirely given over to this “new” material, both inside and out, exception being given to lenses and internal shutter mechanisms.

FILM
When the Brownies were first marketed, they came in all possible sizes and took all manner of roll films available at the time. Today, they take 120 roll film in black/white or color. When in the 1930s Eastman Kodak created 616 and 620 film (essentially the same size film as 116 and 120 but on a modified spool) to ensure that Kodak users used only Kodak film, the Brownie designs were altered to take these rolls. Eastman Kodak and all other film manufacturers had discontinued 616 and 620 film by the 1980s. Since 120 film is still in use as a “professional” film it is widely available, but in order for it to be used easily in a 620-roll film Brownie it must first be re-rolled onto a 620 spool. 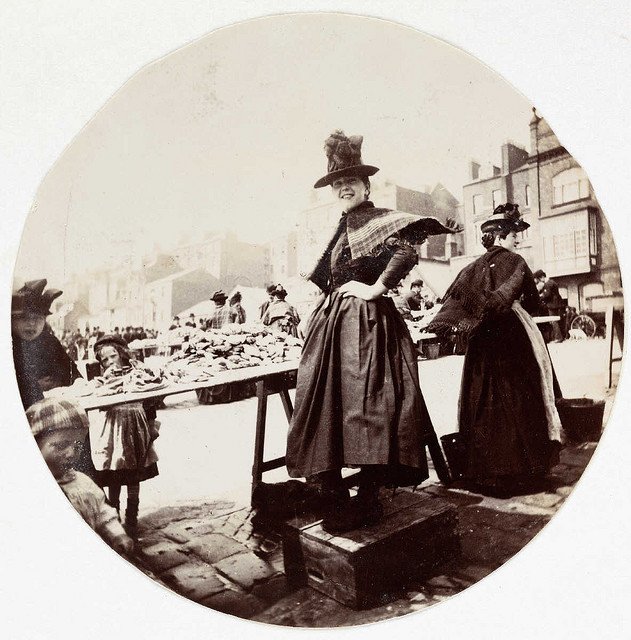 Women at a market stall about 1890 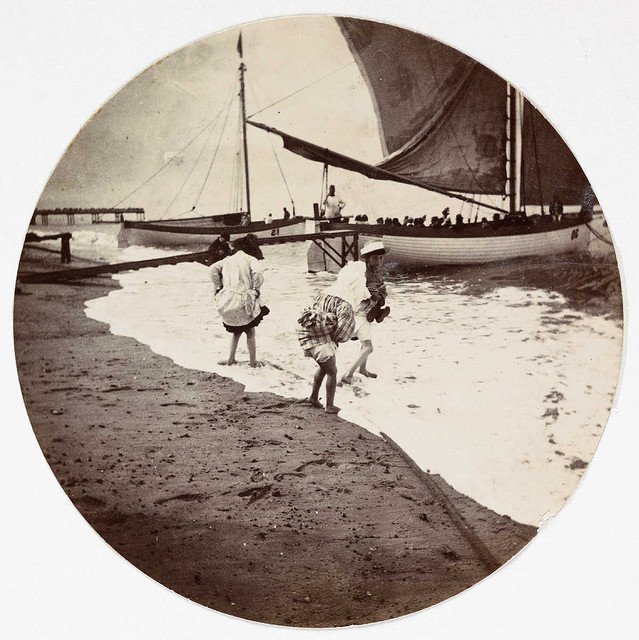 Children paddling in the sea about 1890

Final thought – The camera I am holding so carefully in my hands was once cradled in the same way by another living person before I was born. I thought about this the first time I used it and will probably continue to think about each time I take a photo. With millions of instant photos taken every day, and posted to social media sites often without a thought, the Brownie has changed the way I look at picture making.